By Matt Griffiths
Here in Tucson we are lucky to have a great variety of habitats right at our fingertips. A wide sampling of these is easily available on a trip up the Catalina Highway, aka Mt Lemmon. I’m sure you’ve heard this drive is like “traveling from Mexico to Canada” in 28 miles! Well, those of us who tour by bicycle would love to make the real trip to the Great White North, but time is hard to come by. Instead of weeks or months, you can experience the vegetation and birds of the Sonoran desert all the way up to coniferous forests in one day -- by bike! I decided to do just this recently, and taking a cue from our Birdathon, I tried to score as many bird species as I could.

I loaded up my trusty touring bike with camping gear, food and water and set out across town listening for bird song in between watching the traffic flow. I easily picked up the usual urban “tolerants” (tolerant enough to share space with humans!) such as White-winged Dove, Cactus Wren and the occasional singing Bell’s Vireo at wash crossings. 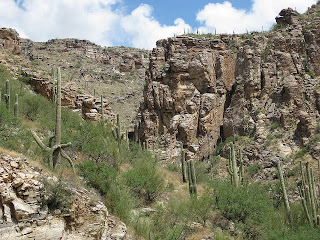 Turning off Tanque Verde and heading toward the mountain, habitat fragments become larger and harbor more and more bird species. The lower slopes are classic Sonoran desert, and here you quickly discover the birds that are not so tolerant of marginal habitat. I never saw any of these species, but it sounded like Ash-throated and Brown-crested Flycatchers, Pyrrhuloxia and Black-throated Sparrows were all enjoying the morning!

After about 6 miles of climbing at Molino Basin you enter Madrean oak forest characterized by several oak species and patches of grassland. This is when you look up from your handlebars and notice that things look different. I stopped to snap a few photos of the dense forest of Arizona white, Mexican blue and silver leaf oaks that hugs the creek at the canyon bottom. I knew there were many new birds to discover here, so I kept my ears open. Once riding again I heard the sweet song of a Scott’s Oriole, had a Cassin’s Kingbird and an Arizona Woodpecker pair fly across my path, and then a silky black Coachwhip snake race along in front of my tire. I always thought that traveling by bicycle was non-obtrusive, but this was ridiculous!


A little farther along you enter Bear Canyon, a fortress of rock formations and giant Arizona Cypress and Sycamore trees. About this time I was really starting to feel the effects of the effort and the stifling humidity. A mandatory rest stop proved productive as a chorus of raptor screeching drew my eyes to the sky. I was surprised and excited to see four Peregrine Falcons calling and chasing each other around, with a Common Raven joining in on the fun. I would later kick myself for not shooting some video footage of this—perfect for a blog! 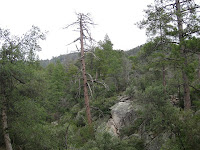 So, I had wanted to make it up to about 8000 ft to camp, but now the rain was already moving in and my body wasn’t in synch with my mind. I decided to camp at Hitchcock Campground in the pine/oak forest of Bear Canyon at 6000 ft. After intermittent rain showers this was a wonderland of Dusky-capped Flycatchers, Painted Redstarts, Western Wood-Pewees, Hermit Thrushes, Plumbeous Vireos and a single Juniper Titmouse.

Night birding from my camp was easy. Despite the rain, conditions were calm, so I easily heard Common Poorwill, Whip-poor-will, and Flammulated, Western Screech and Elf Owls.

The next morning I hiked part way up the Green Mountain trail which heads up canyon and eventually deposits you back on the Highway at San Pedro Vista. This is a great scenic trail that I would recommend to anyone who loves steep climbs with views! Anyway, on the way back I found two juvenile Cooper’s Hawks patrolling the area who were happy to come perch right above my head! I got great looks at the birds and their behavior but once again forgot to get any kind of photo or video documentation! I guess I really do live for the moment.

As I was packing up camp a thunder-laden group of clouds began marching overhead, so I quickly hit the road and rolled down to the valley where the heat returned and the rain was nowhere to be seen. All told, I had found 51 bird species. Not too bad for bike seat birding and not making it to “Canada.” I guess I probably ended somewhere in the foothills of the Sierras in Northern California… 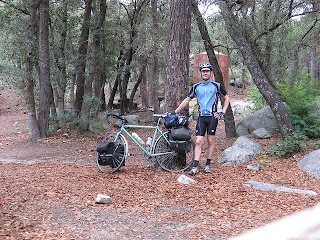