It’s all about water on the Great Plains, and never more so than in early spring, when the great rivers become highways for millions of northbound birds. The Missouri, the Platte, the Dismal, and the Loup were all on our itinerary last week, and repeated visits proved once again how truly Heraclitean these midwestern streams can be at this season: wintering Common Goldeneye one day are replaced by migrant Lesser Yellowlegs the next, and American Tree Sparrows slowly cede the thickets to arriving Field Sparrows.

We started our tour, right on time, with a walk at Wehrspann Lake, one of innumerable flood control reservoirs on the once-deadly Papio. The only thing threatening us, though, was a slightly chilly wind as we watched Eastern Phoebes chase through the grass and a fine mink shadowing a pair of Mallards along the lakeshore. The Eastern Meadowlarks singing from the tallgrass patches were noticeably darker and their vocalizations noticeably thinner than those of the Lilian’s Meadowlarks of southeast Arizona, with which they may or may not be conspecific. Hope sprang with the loud trill of a chorus frog–the only one we would hear all week.

The next morning found us up and about in Fontenelle Forest, where a singing Hermit Thrush was taking over from a Barred Owl and Carolina Wrens dashed in and out of the dark underbrush. The floodplain forest was less birdy, though waterfowl diversity was gratifyingly high, with large numbers of Lesser Scaupand Blue-winged Teal on the water and Wood Ducks in the trees overhead; an odd sight was a Canada Goose on an apparent nest high atop a tall stump. A couple of Swamp Sparrows and two Rusty Blackbirds were sure signs of spring.

After lunch we set off for southern Sarpy County’s wetlands, with a quick stop at Haworth Park for a look across at the nesting Bald Eagle on the Iowa side (surprisingly, this was the only individual of the species we saw the entire week). Base Lake, nearly empty just a week before, this time was paved with waterfowl, including Hooded and Red-breasted Mergansers, newly arrived migrants. The ephemeral wetlands of the La Platte bottoms had more ducks, mostly Blue-winged Teal, and the first sandpipers of the tour: a Lesser Yellowlegs and several Wilson’s Snipe. The same intricate patterns that make snipe so hard to see in the grass make them among the most beautiful of all shorebirds when they’re caught feeding–uncharacteristically–out in the open.

That evening we sought the snipe’s even more ludicrously snouted cousin, American Woodcock–and failed. Three birds were audible, just barely, above the wind, but sleet and snow in our eyes kept us from so much as glimpsing their displays overhead at what had always been my fail-safe site. That’s birding–and we would have another chance later in the week anyway.

It felt hard to turn our backs on the east: we just knew that birds were piling up to our south, waiting for a change in the weather. But the siren song of the central Platte Valley was too much to resist, and a couple of hours after we got up, we were admiring the thousands of Sandhill Cranes on the fields and checking through the waterfowl for Richardson’s Cackling and Ross’s Geese.

A walk at Crane Meadows took us to a thicket crawling with Harris’s Sparrows, and the first Field Sparrowof the spring joined them; there aren’t many places in the world where those two species can be watched in the same brush pile! Four American Pipits paused on a sandbar, while two noisy Greater Yellowlegsdanced in the channel among the abundant Blue-winged Teal.

Our dinner in Grand Island came complete with a performance by the renowned comedy team Clueless and Surly, but we were too tired to care about anything but our anticipation of the next day’s birding. It started in the parking lot of our hotel, with Canada Geese and dramatic Common Grackles, and continued as we birded our way west along the Platte to Elm Creek and north into the Sandhills.

A stop at Ansley’s town lake threatened for a moment or two to become permanent, but a push and a shove later we were on our way to Mullen. We had just time to check in to our rooms and throw on an extra layer before heading out to the lek, the booming ground of Greater Prairie-Chickens.

This was the same lek I’d visited the week before, but what a difference those few days had made! There wasn’t a breath of wind, and the spirit was so much upon the birds that a couple of them walked right under our schoolbus blind.

We had about 60 dancing males on the lek, which is on hay at the edge of a cornfield; the moaning hoots and drumbeat foot-stompings were nearly constant. 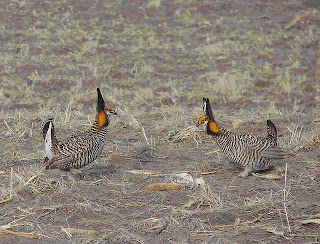 It was one of the best shows I’d ever seen in more than three decades of chicken-watching, and even Mitch–who takes it personal when the birds don’t perform as he thinks they should–was happy with it.

It was another short night, but I don’t think any of us cared. And what a joy it was to wake up a few hours in and find the early morning actually warm. I couldn’t remember another occasion when I’d sat in a Sharp-tailed Grouse blind with no mittens on.

The gloves were off out on the lek, too. 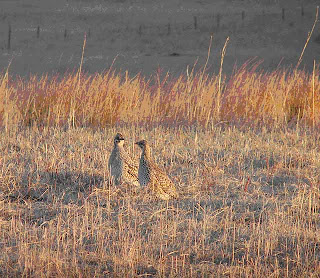 There were as many as nine males displaying at a time, and when a hen ventured onto the floor, the dance became much less ritualized and much more physical; feathers literally flew a couple of times, and I blushed to imagine what the rivals must be saying to each other during the long stare-downs.

I don’t think I’d ever had a more exciting morning with this species, and it was all the better for the fact that everyone else in the group was experiencing it for the first time. 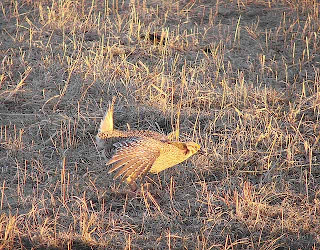 In fact, it was a perfect Sandhills experience all around, from the singing Western Meadowlarks to the lone pronghorn on a distant hillside. Best of all was a pair of Ferruginous Hawks perched together in a blowout; I can never see this species often enough, and it had been a couple of years since I’d seen it in Nebraska at all.

Breakfast was as welcome as it was substantial, just the thing to fortify us for the drive back east–already. No matter what Google Maps says, it’s a long drive, but we made good time and found little, unfortunately, to delay us as we checked some traditionally good crane spots along the way. We were back in Bellevue in time for supper and a second visit to the woodcocks of Lake Manawa. 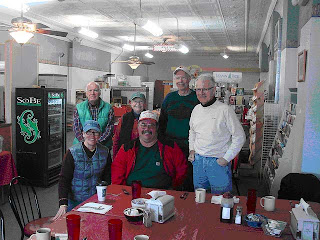 They treated us better this time, three birds visible against the dusk, one of them maddeningly close as it buzzed from the ground. Soon it was too dark to pick them out overhead, and we hatched a plan: we’d leave the hotel with our bags the next morning and spend a few hours looking for the birds in daylight before heading to the airport.

It was a good plan and a remarkably beautiful morning, but we didn’t manage to find any long-nosed leaf-colored birds. We did lose a year’s growth when a Wild Turkey flushed at intimidatingly close range to land in the cottonwoods above our heads, and the sparrow tally was quite respectable, with a singing Field Sparrow and a couple of really breathtaking Red Fox Sparrows. A Tree Swallow was investigating nest boxes, and thirteen-lined ground squirrels were trilling their high, silvery calls. Prairie spring!

I stood in the Indian grass and soaked up the sun and the warmth, knowing that I wouldn’t find much waiting for me in Vancouver. And then it was off to the airport, dropping my friends at the terminal, returning the vehicle, checking in, and settling in to wait on my own flights home.

And starting the planning for next year.

Thanks, we value your opinions! Your comment will be reviewed before being published.