Promotional materials for the Sky Islands Birding Cup state that “The challenges involved in this particular competition are intriguing.”

My team members and I discovered just how “intriguing” the challenges could be as we participated in the first of this annual bird watching competition on August 17, 2011. 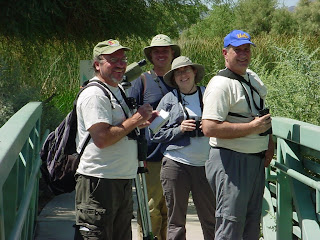 The Cup is a “big day” competition, meaning that the objective is to see as many bird species as possible in a 24-hour period, starting at midnight and ending the following midnight.

August is a great time to do this in southeast Arizona because it’s the period of highest bird diversity. Nesting species are still here, migrating species are starting to come through from the north, and others show up as part of their pre-migration post-breeding dispersal. It’s also a time when it doesn’t conflict with other birding competitions like the World Series of Birding in New Jersey and the Texas Birding Classic.

The first challenge was coming up with a team name. I left much of the planning to others while I was on vacation and when I got back our team was named Can’t Stop the Rock Wrens. This was apparently in honor of a rock anthem that 50+-year-olds have never heard of. 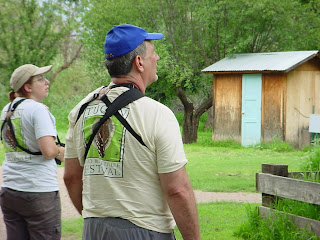 Jennie and Vern at the Patons' place, note their Tucson Bird and Wildlife Festival shirts

But the important part is the birding and my team members had also decided on a great route—a slight variation on of one of the standard southeast Arizona big day routes. It looked good to me! I was excited about the challenge of finding as many bird species as possible.

The key challenge to big days is getting to as many different environments—containing habitat for distinct assemblages of birds—as possible in the time allowed. Accordingly, the first part of our trip would take us up the Santa Catalina Mountains for high-elevation species, before hitting other desert, wetland and grassland locations.

There are only so many species you can find at night so we eschewed starting at midnight. Instead we met for a 2 a.m. start. I was grateful for the extra two hours of sleep.

After loading the car and making sure we had enough coffee, it was more like 2:15 as we started driving five miles through the high desert toward the base of the mountains.

Stopping in the desert we found western screech-owl. At the base of the mountains we heard both elf owl and great horned owl. Further up the mountain we heard whiskered screech-owl and common poorwill. But the rest of the morning before light we drew a blank, missing other owls and never finding a Mexican whip-poor-will.

There were three unexpected discoveries in the mountains in the early morning hours. First was the number of animals we saw besides birds. Snakes were crossing the road as we drove up, and several skunks were seen along the road. After first light we saw several white-tailed deer.

Second was the temperature. The desert in August at 2:15 in the morning is very comfortable, but as we went up the mountain, reaching nearly 8,000 feet, it got cold. I thought that a T-shirt, a long-sleeved shirt and a warm vest would be enough but I still was a bit chilled.

At first light we started hearing daytime birds, with Stellar’s jay being the earliest and most vociferous. The third surprise was the best bird—at least most unusual bird—of the trip. Perched in a dead pine on the slopes above Summerhaven was a short-tailed hawk! Formerly found only south of the border and in Florida, in the last decade small numbers of this species have shown up in southeast Arizona, mostly in the Chiricahua, Huachuca and Santa Catalina Mountains.

As the sun came up we heard more and more squawks and chips and we kept stopping along the road to try to identify them. This presented one of the “intriguing challenges” of the competition: when to give up on a location and move on. It’s tempting to stick around and try to squeeze the least few species out of a location like Mt. Lemmon, especially beauties like red-faced and olive warbler, western bluebird and hairy woodpecker. But that might mean that you don’t make it to one of the other habitats where more species await. Eventually we hurried on.

All in all we stayed in the mountains too long. By the time we got to our next stop—Sweetwater Wetlands near downtown Tucson—it was mid-morning and it was hot! It would have been nice to have gotten there a little earlier when bird activity was higher and before the mid-morning heat. I had not brought anything in which to carry my water bottle, thinking we would always be close to the vehicle. So I was flagging a bit as we circled the wetlands.

Still, Sweetwater Wetlands has a huge number of birds, from tropical kingbirds to common gallinules. Even though they were growing less active with the heat, we still racked up an impressive list there.

Moving on, we headed to Madera Canyon. We added some additional species including grassland sparrows and Say’s phoebe in the lower end of the canyon. At the Madera Kubo feeders we saw some new hummingbird species—including the brilliant violet-crowned hummingbird. 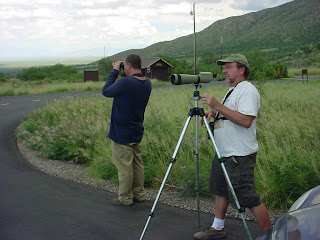 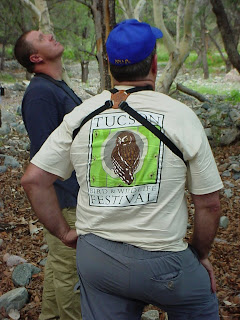 Richard tracking down a Hutton's Vireo at Madera Canyon

As we watched hummingbirds the weather reversed again and heavy, cold rain drops began to fall. An easy decision was made to move on to our next stop. In this case it was a gas station and mini-mart in Green Valley, to buy fuel and drinks! I loaded up on Gatorade and iced frappuccino, since I needed both to rehydrate and to stay awake. This was a combination that would come back to haunt me later during the long, restroom-less drive to Willcox.

At the Amado sewage ponds there were several swallows we hadn’t seen as well as black-bellied whistling duck and a few other species. In the flooded fields and ephemeral ponds off of Rio Rico Drive we picked up great egret and green heron.

The trick now was to make a couple stops in the Patagonia area and still have time to get to the Willcox ponds before dark. The ponds are a magnet for migrating waterfowl and shorebirds in the middle of dry, high-desert grasslands. But it is a long drive—nearly two hours—from Patagonia.

At the Patagonia Roadside Rest there were thick-billed kingbirds squawking as soon as we exited the car. At the Patons’ place we added an Anna’s hummingbird and a few other species. 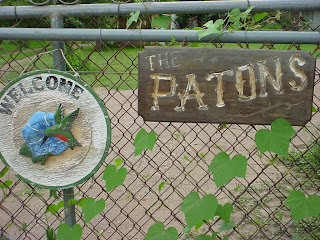 By mid-afternoon the high desert heat had given way to stormy, overcast skies not uncommon to August afternoons. We had to make a decision about our final chess move of the day. We had time to get to Willcox before sunset, but with the skies full of clouds it would be darker than usual. We decided to go for it, since it still represented our best chance for a whole new set of species.

On the road north from Sonoita to I-10 we had a huge delay of over 15 minutes while we waited for a flagman to wave us through a construction area with only one lane of traffic. We were afraid this would derail our effort to get to Willcox with some light remaining. The only good thing that happened while we waited was that a peregrine falcon flew buy. 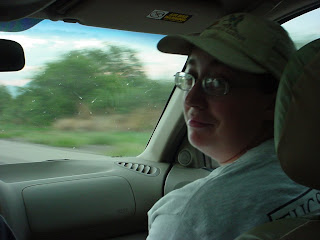 Jennie as we streaked toward Willcox

As it turned out we were able to get on our way and rushed down I-10 toward Willcox. We picked up a Swainson’s hawk along the highway and then arrived with enough time to see quite a few species around the ponds. Lots of sandpipers were still visible in the waning light. In the final moments of light quite a few black-crowned night-herons emerged from the trees around the golf course and gave us our final species of the day as the circled the ponds. 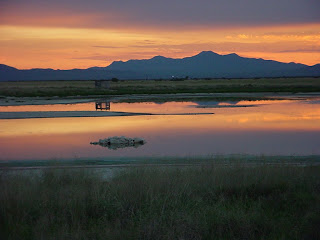 We finished with 137 species. This was no where near the record (199) and not enough to win the competition, but it was a great day for us. We have great memories and any number of reasons to do it again next year. Having experienced the challenges—and also the payoffs—of birding southeast Arizona in August, I’m sure we’ll want to do it again.

Among the reasons to enter this competition is that earnings from the Sky Island Birding Cup are used to protect areas where birds live and where birders go to see them. This is important for the health of our environment, the enjoyment of birders, and to safeguard and build the large economic impact of ecotourism in our region. Wildlife watching in Arizona—much of which is bird watching—has a “total economic impact” of around $1.5 billion annually. That’s more than the impact of golf.

The Sky Islands Birding Cup will become an institution that adds to that economic impact and that brings a lot of enjoyment to that portion of birders who feel like a little good-humored competition once in a while!

Thanks, we value your opinions! Your comment will be reviewed before being published.