A Birding Trip to Botswana: Part 4

The Road to Savuti

On the way to the Savuti camp, which is located in the Savuti Marsh, we saw among many other birds the Yellow-billed Kite (with its bill and wedge-shaped tail) and the shy Swainson’s Spurfowl (which should be renamed the Red-masked Spurfowl), and two unusual birds: Burchell’s Sandgrouse (with perfect camouflage) and the Black- crowned Tchagra (with a black eye stripe and a striking, white supercilium). We also saw the very distinctive White-browed Sparrow-weaver with its conspicuous white eyebrow and white wing bars. We saw an entire Common Ostrich family – parents with about 20 chicks stretched between them. At one point the female did a strange wing-flapping dance – perhaps just letting off steam from the stress of trying to keep so many chicks alive in a land of predators. Just before we arrived at Savuti camp, we saw the remains of “a tooth and claw” event: in the middle of the road a dead African Cape Buffalo was feasted upon by two kinds of vultures (the Lappet-faced and the White-backed and a couple of hyenas. We were looking for the African Hoopoe but Richard found the Green Wood Hoopoe (with its long decurved red-orange bill, iridescent green plumage and long tail and wings - both with beautiful, large white patches) and another absolutely unmistakable gorgeous bird, the Crimson-breasted Shrike (with a jet black back and wings with a big white wingbar).

We spent two days doing both morning and evening trips in order to explore the huge dry savannah area around the Savuti camp. Each morning on our trip we would awake to a cacophony of bird calls, but the Southern Pied Babbler (a white & black robin-sized bird with black wings, but not variegated enough to be named with the word “pied”) and/or the Arrowmarked Babbler seemed to be causing most of the noise, along with spurfowl. We saw two of the largest and arguably most famous birds in Africa: a pair of Secretarybirds (41 inches tall weighing as much as 11 pounds; with head plumes reminiscent of teenagers with spiky hairstyles and tail feathers which protrude beyond its legs while in flight; it catches its prey only while striding.)We could barely keep up with them as they paced their elegant way across the grassland. Then we got great views of the Kori Bustard (they weigh as much as 40 pounds - the heaviest flying African bird; the male displays by inflating its throat, drooping his wings, cocking his short tail, and strutting about. No wonder this is the official national bird of Botswana.) One was in the company of a dwarf mongoose and looked for all the world like he was taking his pet for a stroll. Distant views caught the Pallid Harrier and the Montagu’s Harrier, which being harriers, quickly glided away. All of these birds were wonderful to see through our spotting scope. But we got the most wonderful photo of a pale-morph Tawny Eagle, with its heavily feathered legs, looking unusually blonde.

Other marsh birds that we liked were: the Northern Black Korhaan (the male with a black head, neck, and belly, red bill, and brown, barred back and wings), the Crested Francolin (with its black crest and white eyebrow), the Rufous-naped Lark (with its very distinctive call of tseep-tseeoo that was much admired by Richard), and the Double-banded Courser (besides its obvious bands it has chestnut color on the trailing edge of its wings when it flies.). We saw the knob on Knob-billed Duck, which only appears during breeding season.

One morning in a hilly area not too far from camp, Richard cleverly spotted a Pearl-spotted Owlet (only 7-1/2 inches, with its two false black eye patches in the back of its head, it reminded us of the Ferruginous Pygmy-Owl (6-3/4 inches) from the front and especially because of the facial expression and the brown color of its body. Later in the day as the sun was rapidly going down, we saw the most exciting owl of the trip: the huge (24-1/2 inches) Verreaux’s Eagle-Owl, which we spotted across from our tent cabin just before a big rain storm, and then again early in the morning the next day, we saw him elsewhere looking rather comical because he was so wet and bedraggled. In both instances his pink eyelids were striking. 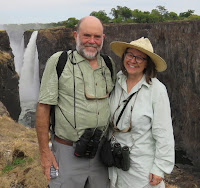 Alan and Albert Adler have been residing in Tucson since 1998. Alan has been a lifelong birder, and from June 1999 through August 2002, he served as a writer and the volunteer editor of Tucson Audubon's Vermilion Flycatcher. In the spring of 2000, he was very pleased to report that the 32-page “newsletter”, as it was known then, was ranked 1st among those from 10 other “very large” chapters, beating Seattle, Greater Denver, and Fairfax, Virginia in the competition held by the National Audubon Society.  For the past seven years, Alan has volunteered with the Lend A Hand Senior Assistance, Inc., twice serving as its co-President. Albert began birding as an adult and has worked as a pediatrician with the Tohono O’odahm tribe since August 1998. The photos that accompany the article were taken almost entirely by Albert.