Who's Been Drinking My Hummingbird Food at Night?

Bats, that’s who- specifically Lesser Long-nosed Bats. Arizona is home to 28 species of bats. Twenty six of those species are insect eaters. Two are nectar feeders. During the fall, from August through October, hummingbird feeders in Tucson provide one source of food for these special creatures.

The Lesser Long-nosed Bat undergoes a long distance migration to get to the Tucson area (and they are one of only a few species that migrate such a distance). They come up every spring from Mexico, following the flowering or fruiting cycle of their food sources: saguaro, organ pipe cactus, carton, and agave- their primary food sources. The pregnant females roost in neighboring mountains in large groups and have their babies in the summer after a six month gestation period. Bats give birth to one pup per year.

In the photos below, I have removed the red tops to the hummingbird feeders to allow for a better view of the bats. Please don’t do what I do. Leave the red tops on the feeders and the bats and the hummingbirds will still be able to feed without spilling the nectar all over your porch Thanks. 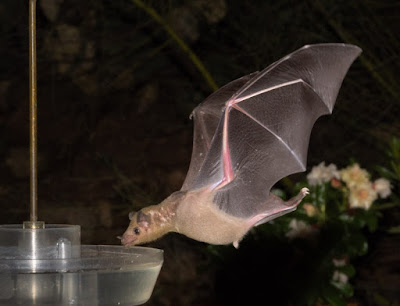 Bats are mammals, so they nurse their young as all mammals do. After a month or so, the pups will leave the maternity roosts and begin flying and feeding on their own. The bats are the only mammal that can fly and they come out at night to feed. 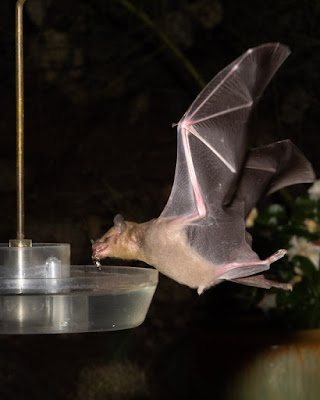 Bats cannot hover to drink nectar like hummingbirds do. Their technique is to fly up to food and right at the moment they are at the top of their flight, before they begin falling, they “stop” midair to slurp up some nectar. 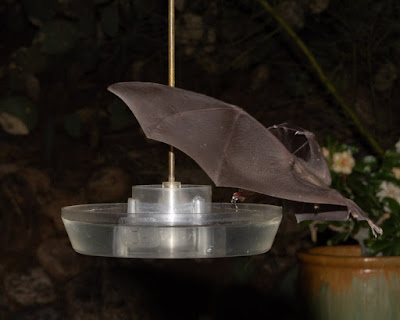 And then after taking a quick slurp, they fall away, splashing droplets of hummingbird food around them. Many of my photos are of this type as the bats appear quickly, out of the dark to feed and my reflexes are not as fast as they are. In the photo below you can see another feature of the Lesser Long-nosed Bat. It does not have a tail, and is described as “wearing pants”. Most bats have a membrane between their legs. For Lesser Long-nosed Bats who migrate long distances, the membrane would produce more drag in the air, making it more difficult to fly long distances. So there is no membrane and that allows the bats to expend less energy when they migrate. 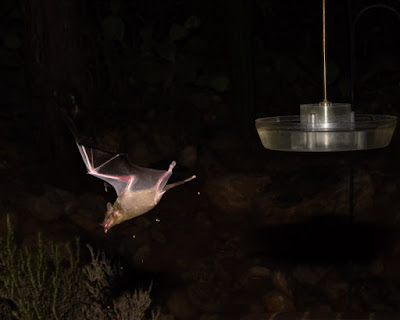 Bats wings are made up of a thin membrane stretched over the bats arm and fingers. Bats have a thumb and four fingers. The tiny thumb is at the bend atop their wings and is visible in some of the other photos. It has been said that bats fly through the power of “jazz hands”! 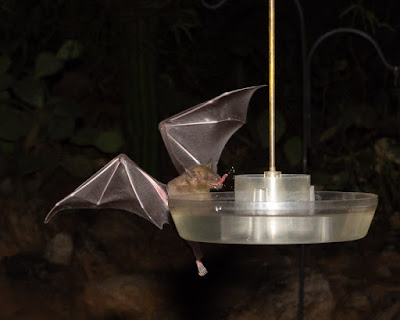 You may have noticed that “belly button” thing sticking out on each bat. I asked Scott Richardson, the local US Fish and Wildlife Bat expert, about that and sent him several photos. His response was: "Both sexes have an appendage. In females, like your photo, it is a small appendage. In males, it is the penis and it is obviously larger than the female appendage. You just have to see a bunch and it becomes obvious. Most of the bats at feeders are female and most are juveniles (young born this year or last). It can be harder to tell male from female in juveniles, but it is still pretty obvious. If you get a male, I am guessing it will be obvious to you that it is a male. It is most likely all you are seeing is females.”

I’ll leave it up to the reader to decide. 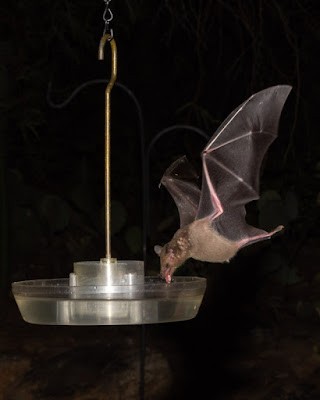 Doesn’t this bat look cute? It appears so happy to be close to a tasty drink. Notice the pointy thing sticking up on its snout? That is called a noseleaf and Lesser Long-nosed Bats are part of the leaf-nosed bat family. 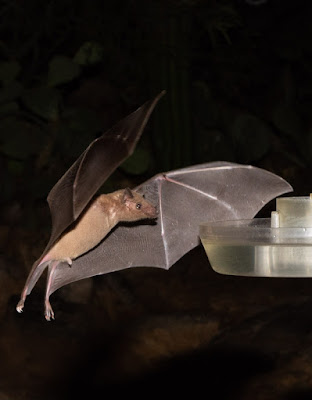 You can see this bat's thumbs sticking up above the wings. 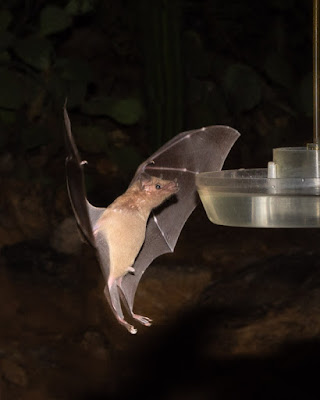 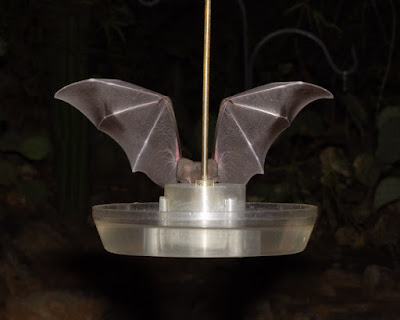 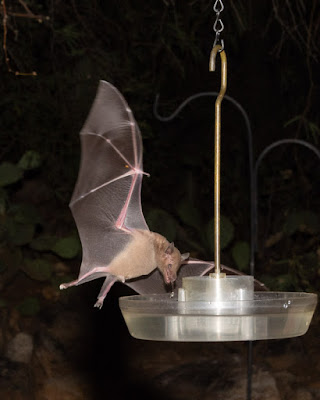 The tongue of a Lesser Long-nosed bat has adaptations for lapping up nectar. Their tongue is actually almost as long as their body to allow them to probe deeply into the big flowers they feed from. 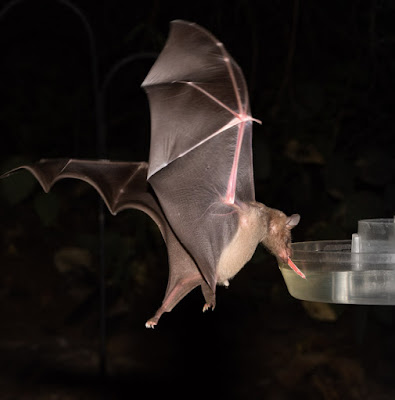 Now look at the legs of this bat. You can see a membrane stretched between the legs, letting us know this is the other nectar feeding species found locally- a Mexican Long-tongued Bat. 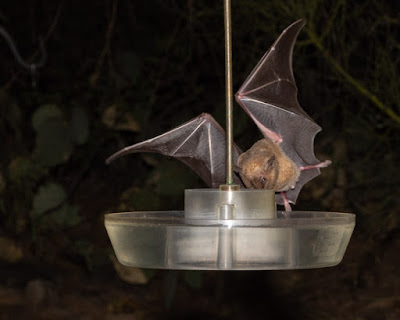 One last look at the lack of a tail membrane on this Lesser Long-nosed before we look again at the other bat, our Mexican Long-nosed Bat. 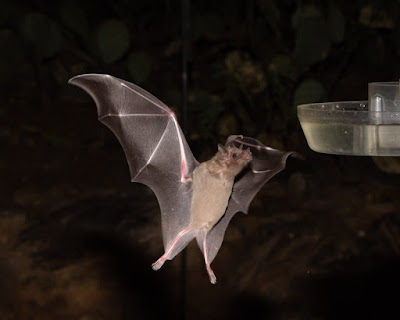 You can see the membrane or skirt between this bat’s legs. You can also see that this bat has a much longer snout than the Lesser Long-nosed one. 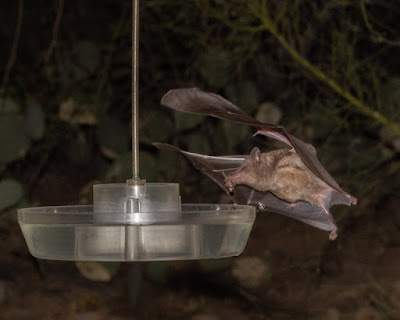 Here is one last look at that tail membrane and the snout of the Mexican Long-tongued Bat. 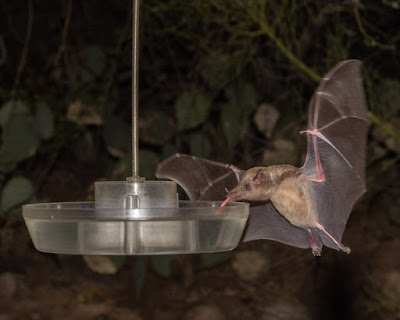 The town of Marana has been studying these bats for years now. For information on the study and how you can participate, see http://www.maranaaz.gov/bats/