The Longview on Longspurs


I’ve participated in many Chestnut-collared Longspur (Calcarius ornatus) surveys over the years, but I'd never arrived in Patagonia on a 14 degree morning! Despite the cold, the Gathering Grounds Cafe was warm and inviting, and filled with birders excited for a day of adventurous bird counting.

After meeting my team, and waiting for the temperature to rise, we headed out to the San Rafael Valley, a Chihuahuan Desert grassland filled with wintering sparrows and raptors. It was a first visit for one of us, and it’s always fun to watch someone’s reaction when you crest the final rise out of the oaks and into what looks like Oklahoma.


Tucson Audubon and the Arizona Important Bird Areas (IBA) program have been conducting surveys for CCLOs in San Rafael since 2010, and in the Las Cienegas National Conservation Area since 2015 (both are designated as IBAs due to their significant populations of longspurs).

Why care about longspurs? The species has declined by more than 87% since 1966, largely due to habitat loss on its breeding grounds in north-central U.S., and its wintering grounds in the American southwest and north-central Mexico. It has been listed as Near Threatened since 2004, and in 2018 was elevated to Vulnerable status, one step below Endangered. The birds are in trouble—their habitat is being developed for housing and agriculture, and being invaded by non-native grasses such as Lehman’s lovegrass here in Arizona. To combat this, Tucson Audubon is in the first stages of determining a habitat restoration strategy for CCLOs, with the long-term goal of providing management recommendations to land owners about how to make the land and ponds more suitable for the birds.


When you participate in surveys, every year is different—variables such as rainfall and food availability make finding the birds tricky, and usually one site is much better than the other. This year, the San Rafael Grasslands had significantly more birds than Las Cienegas, and my team found over 300.

There’s one particular field on my route (I’ve dubbed “Longspur Mesa”) that has had longspurs on almost every survey I’ve done, and it’s a case study for our current thinking on what the birds need to survive. There’s a water source nearby (a cattle pond with muddy edges), an open viewshed with few trees, a good mix of native grasses (gramma, sacaton, beardgrass, and others), and little to no Lehman’s lovegrass. We found a sizable flock there, which is always exciting. We usually hear their kiddle calls before seeing them in their “popcorn popper” flight pattern. Up and down they go, usually circling the surveyors a few times, almost landing, but then deciding not to, and almost always calling the entire time.


A typical Chestnut-collared Longspur survey might include any number of wildlife sightings such as pronghorn and prairie dogs. This time, our list included four White-tailed Kites, a Golden Eagle, a beautiful pair of Hooded Mergansers, and multiple Northern Harriers. These surveys are a fun way to get involved at Tucson Audubon, and you’ll know the work you’re doing is so much more than just counting birds: your participation directly impacts our efforts to conserve Chestnut-collared Longspurs.

Be sure to keep track of our survey schedule on the IBA website and I hope to see you out there. 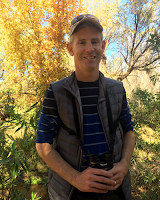 Matt Griffiths is Tucson Audubon's Digital Media Coordinator but is still allowed out of the office sometimes to look for birds. Some of his favorite things are hearing Whip-poor-wills and Canyon Wrens singing in a local Sky Island. He considers the Loggerhead Shrike to be the coolest local bird.
Labels: Chestnut-collared Longspur IBA Program Las Cienegas Matt Griffiths San Rafael Valley