On Saturday, September 25—National Public Lands Day—about thirty-five volunteers headed out to a hillside in the Ironwood Forest National Monument. Their objective was to pull up invasive buffelgrass and clean up trash at a site where people shoot at targets. The volunteers were recruited by Tucson Audubon, Friends of Ironwood Forest, and the Town of Marana.

Volunteers were to be lauded just for making the drive out to this remote location west of Tucson—it’s about twice as far as driving from downtown to the Arizona-Sonora Desert Museum! The location is called El Cerrito del Represo—the “little hill next to the cattle tank.” 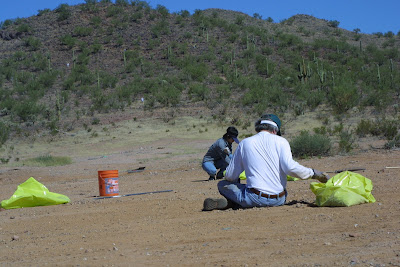 We split into two groups. One dug up buffelgrass on the hill while the other picked up trash—mostly spent shells and debris from targets. It is legal to shoot on public lands such as this, but it is not legal to litter! There are responsible shooters who pick up their ejected cartridges. But there must have been an awful lot of people over the years that didn’t, since there are thousands upon thousands of shells littering the ground. 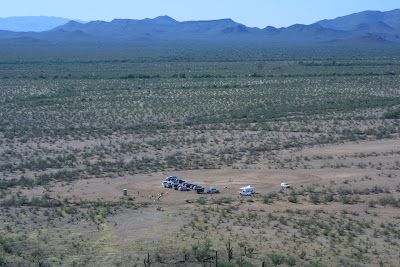 The shooting site where we parked and picked up trash, as seen from the hill

Tucson Audubon’s objective here was not only to pull buffelgrass and pick up trash. It was to expose people to the great outdoors, to teach them about some of the many environmental issues that we are facing, and to demonstrate the kind of work that Tucson Audubon does in this region--and that other Audubon chapters do all over the country. Tucson Audubon’s participation in this project was partially funded by a TogetherGreen Volunteer Grant. TogetherGreen is a program of the Audubon Society, funded by Toyota. 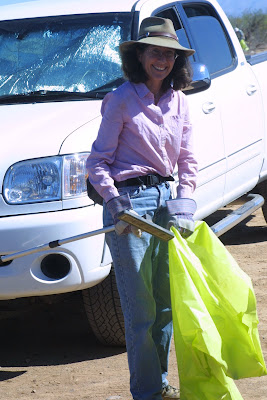 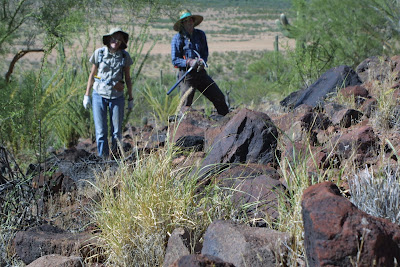 The offending grass, foreground, with volunteers ready to pounce on it

About halfway through the morning, we called a break and Darrell Tersey of the BLM talked about some of the history and prehistory of that part of the monument. The Hohokam grew seasonal fields of corn, beans and squash in that area irrigated by runoff from a variety of small washes. Then everybody switched jobs and went back to work. 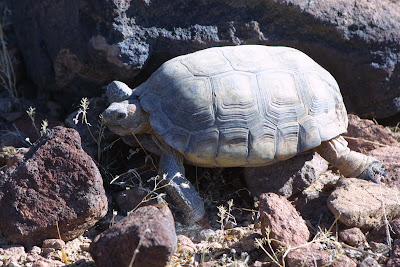 A highlight of the morning was finding a desert tortoise on the hill. In a very short time it went from perhaps never having seen a human to being very heavily photographed! Some participants had never seen one in the wild! 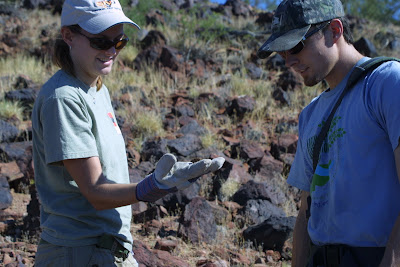 We quit by noon since the September heat was getting pretty intense. Cooler and equally picturesque volunteer days are coming up. Keep an eye on the Event Calendar at the Tucson Audubon website for other upcoming volunteer days. We will be visiting several scenic and interesting locations this fall and winter to plant trees, remove invasive plants, and pick up trash. 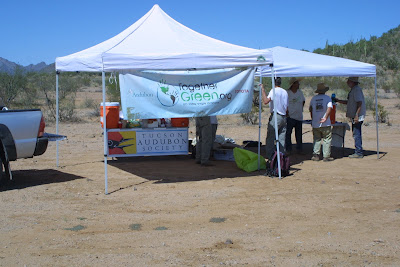 This effort would not have been possible without Lahsha Brown of Friends of Ironwood Forest and Darrell Tersey of the BLM. A big thank you also to BLM staffers Francisco Mendoza and Kristen Lenhardt, and BLM law enforcement officers who patrolled the area in which we were working.
Labels: buffelgrass Ironwood Forest National Monument togethergreen trash