If you have been following Tucson Audubon Society on Facebook recently, then you know about the Villages of Vigneto. The Tuscany inspired housing development is planned to develop 28,000 homes and a golf course in the San Pedro Riparian National Conservation Area.


A Riparian National Conservation Area is designated by the Bureau of Land Management for its value as a transitional ecosystem between a body of water and land. In other words, a riparian area is created by the presence of water flowing through a landscape. Riparian areas are typically very lush areas that home many different species are high in biodiversity (a measure of the number of species in an ecosystem relative to the abundance of individuals). The San Pedro National Conservation Area is created by the San Pedro river and situated on a 57,000 acre plot of protected land. This land supports over 220 species, many of which only occur in this area or very few other places across the world. SPRNCA is also designated by the Environmental Protection Agency as an Aquatic Resource of National Importance and is recognized by the National Audubon Society to house two Globally Important Bird Areas. So, this area is valued and protected by many different agencies for its important role in hosting so many different species and providing ecosystem services to people and animals alike.


Alright. So we know why the San Pedro river and its riparian habitat are really important, but what does that have to do with the Villages of Vigneto? It is not like the houses are going to be built directly on the habitat. Since this land is protected, it is safe from immediate development, but the land around it is not. Herein lies the issue: although land on the surface of the earth may be separated by political boundaries, the underground resources are not so considerate to human legislation. This means that ground water (the water the keeps the San Pedro flowing and chock full of diversity) will be shared by SPRNCA and the Villages at Vigneto.

Vigneto proposes to add up to 70,000 residents to the Benson area, which has a current population of 5,100 people. Water managers are already struggling with shortages across Southern Arizona, and this development would add a lot of water consumers to an already scarce supply.

The argument held by El Dorado Holdings Inc, the developer, is that the types of water that will be used to supply the consumers and SPRNCA are separated. They claim that the clay layer separating the aquifer supplying human populations from the groundwater supplying the San Pedro will not interact when pumping in the aquifer occurs. The United States Geological Survey begs to differ. They say that the clay layer will delay any effects on the San Pedro river and its riparian habitat. This means that groundwater for SPRNCA will become depleted long after the Villages at Vigneto are built.

I keep mentioning effects of groundwater pumping, what are those exactly? Well, there are many, but let's talk about the Western Yellow-Billed Cuckoo. It is a federally listed threatened species that uses areas of SPRNCA for habitat. Tucson Audubon's own Jennie MacFarland has been commissioned by Arizona Game & Fish to estimate just how many Western Yellow-Billed Cuckoos there are in Southern Arizona.


The first third of the huge area will have been surveyed by the end of the week. Staff and volunteers have already found several Western Yellow-Billed Cuckoos in the study area that will provide useful information about the places cuckoos may be found. Current places where cuckoos have been seen are the Patagonia Mountains, Miller Canyon, and the Atascosa Highlands. The remaining two thirds of the land will be surveyed throughout the rest of the summer. Yellow-Billed Cuckoos have already been recorded at SPRNCA, so we definitely know that they are taking residence in Southern Arizona in protected habitat.

What does groundwater pumping have to do with the Western Yellow-Billed Cuckoo? A lot more than one would initially think. Underground water surfaces have water tables that fluctuate in response to the amount of pumping. If a lot of rain occurs and infiltrates into the soil, it will recharge the aquifer and raise the water table. Conversely, if groundwater is extracted without replacing it, the water level will fall. We are worried about the latter issue in this semi arid climate. The San Pedro river is a manifestation of the groundwater that feeds it, meaning that the water table appears above ground and the river happens.

If the water table falls drastically enough, it will fall below the earth's surface and the San Pedro river will either lose a massive volume of water or completely disappear. If the river dries up, I can only imagine how the vegetation that makes the habitat so conducive to biodiversity will hold up. Plant roots used to a certain depth water table will be found reaching even deeper for water access and many will die. The habitat may have some surviving riparian species, but most of the plants will not be able to survive the shock of losing the water source. Especially since these plants consumer high amounts of water, that is why they root near available water. The result will be more desert where life once flourished. This is bad news for species other than the Western Yellow-Billed Cuckoo. If this occurs, all of the riparian species will disappear and a once diverse biological hot spot will shrivel.

Groundwater pumping and wildlife habitat are not the only issues. Many of the Benson local residents are concerned about the traffic Vigneto will bring. The addition of 70,000 residents will increase the Benson area population 13 fold. Residents are concerned that the city infrastructure will not be able to support an increase in population that drastic. Community members have also noted that there are many vacant homes in Benson already, and argue that these homes should be filled before building 28,000 new ones.

The most shocking about the Villages at Vigneto to me is the permit El Dorado Holdings Inc. is using to support this development. The permit was issued in 2006 to a different developer for a completely different development. The development was called Whetstone Ranch, it proposed to add a maximum of 20,000 homes on 8,000 acres of land. Vigneto wants to go even bigger weighing in at a proposed 28,000 homes and 12, 324 acres. The permit was issued to the former development, not the Villages at Vigneto. I feel as though this should warrant an entirely new permit application, but El Dorado Holdings Inc. still currently plans to move forward with that permit.

PLOT TWIST! There is something YOU can do to stop this development. And, it's easy! Benson City Officials will be deciding tomorrow, yes TOMORROW, if they will consider Tucson Audubon Society's formal request to review the permit. That is really soon, but you can still act. Write and email to your local decision makers encouraging them to review the permit and demand that sound scientific research be used when determining habitat impacts of the Villages at Vigneto. You can read about the issue in short below: 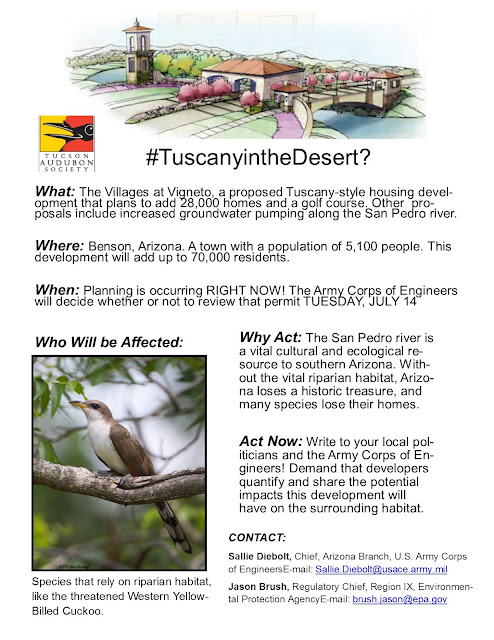 If you would like even more detail, read the Conservation Action Alert that gives talking points if you are having trouble getting started on a letter.
Labels: #TuscanyIntheDesert? Benson San Pedro River Vigneto Western Yellow-Billed Cuckoo